What Are the Strongest K Cup Coffee Brands?

Are you looking for the strongest k cup coffee on the market? I totally get this one, there seem to be no lack of consumers out there who don’t feel like they can get the kind of kick-a** coffee they are craving!

Sometimes you may find yourself asking if kcup coffee in general is just weak unless you run 2 brews and reduce the water amount, or some other hack.

Well, good news, you may not have to fool around with that guesswork anymore, it may just come down to choosing some stronger k-cup coffee flavors and brands that have got some real legs to them.Now I am going to show you my findings and we think you’ll agree you will want to wake up and smell these coffees for sure.

Not only will they knock you off your (_⌊_) but they are NOT artificially enriched with more caffeine  so you know you are getting a quality cup of joe!

Do you naturally assume “stronger” means “more caffeine”?  Believe it or not – the strongest k cup coffee brands are not always the most caffeinated. Why is this?

Me, I like darker roasts because I like a richer taste. Surprise, surprise , dark roasts are not always the most highly caffeinated…usually it is the lighter roasts. What? We think it’s the other way around, but truth be told: When beans are roasted, the whole process has a way of “burning off” caffeine naturally; and the less time they are roasted the more remains intact.

Caffeine occurs residually in the beans (even decaf has small traces after the decaffeination process ) If you are looking for a little more of a hit with your coffee you want to look for extra caffeine k cups, not darker or stronger roast. Also, sometimes the geographical whereabouts of the beans in question have something to do with it. 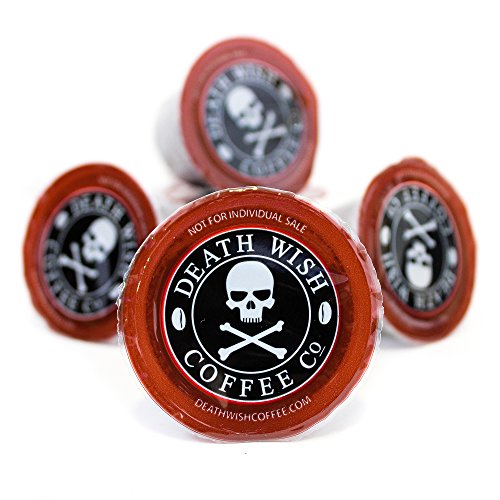 If you are looking for the strongest k cup coffee, look no further than Death Wish – it’s a great company with great values,  now their popular brand of ground coffee is available in k cup pods too!

I took a moment to visit their website/blog; which I recommend, it is impressive with their story. I believe this is the most popular brand as people were enjoying the grounds first and so getting it in pod form now has been the icing on the cake.

Exactly what is the caffeine content present? A source I found states that there is about 54.2 mg of caffeine per fluid ounce of Death Wish coffee so if we assume an average cup (as in one k cup) is about 8 oz, that’s a grand estimate of about 432 mg of caffeine per serving with each k cup which contains 12 grams of coffee overall. If this sounds like a reasonably threshold for you, we think you will love the kick and the rich taste of Death Wish.

The pods themselves have been redesigned lately; at first they were like the most common plastic material but now they are made of a mesh filter design very similar to these I got once. Death Wish k-cups are certified organic and bulk amounts include 10, 20 and 50. They also come in a resealable foil bag, due to the mesh filter design this is a good approach to keep them fresh.

In other words, you’d want to keep them in the resealable bag and not store them in your carousel or drawer for the freshest taste. 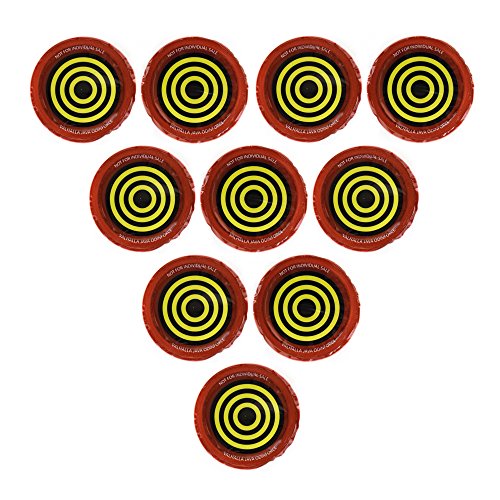 If you’re familiar with Death Wish already, you may really enjoy Valhalla Java too as they are made by the same company. The biggest difference is the taste overall. The beans sourced are a little different regions sourced from than Death Wish. They too, are made in the mesh filter design.

The caffeine content in Valhalla Java k cup pods is slightly less than Death Wish – one consumer stated that there was about 140 mg of caffeine present in an 8-oz serving. Its flavor is a little bit different in that it’s more “nutty” and aromatic.

Consumers appeared to enjoy this brand equally as much as Death Wish – the artwork on the bag and the name “Odinforce” pods – can’t argue with how cool that is; a coffee brand named after Norse folklore is a winner in my book. 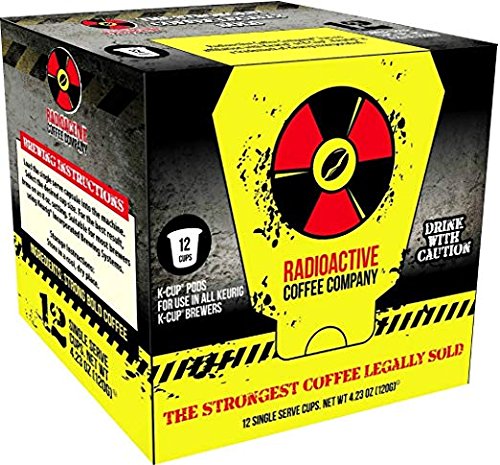 This is another brand that claims it is the strongest out there; some people liked it and some did not.The main thing that was raised is that the pods’ design doesn’t favor the 2.0 series of Keurig. So if you don’t own a brewer in that category you should have no problem.

If you take a minute to read the sales page you will get a chuckle or two – it’s quite entertaining. Only problem is that the caffeine amount ballpark is never specified (and I looked at the packaging from every angle shown) So it’s hard to say for sure. I am basing this on the reviews left for it. I would suggest trying out the smaller package size and see how you like it!

Wake The Hell Up

It’s got a catchy name and it’s made by a good company based out of Utica, NY, Wake the Hell Up has a medium-dark roast sourced from South American beans and twice the caffeine content of the average brand (so imagine your usual brand just intensified a little more.) With regard to the k-cup pods there is also a Jamaican Me Crazy and Cannoli. 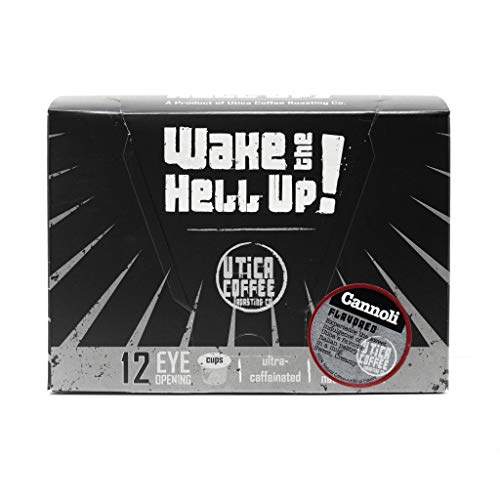 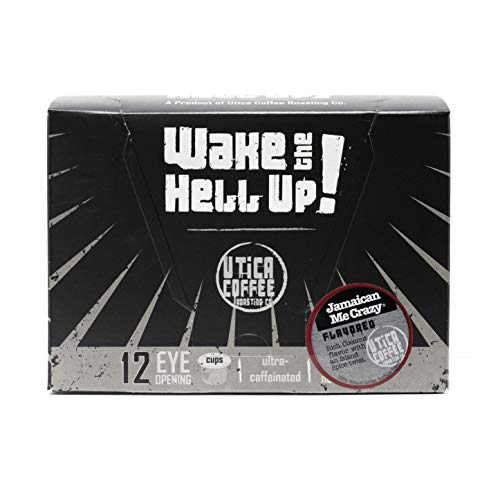 Wake The Hell Up Coffee, Jamaican Me Crazy Flavored

Jamaican Me Crazy has a little bit of a coconut and spice twist to it and Cannoli is inspired by an Italian pastry flavor. Bet part of all is that Wake the Hell Up kcups are 2.0 compatible so no worries about hacks or irksome oops messages to rankle you!  Worth a shot – lots of satisfied peeps have tried it and continue to enjoy drinking it. 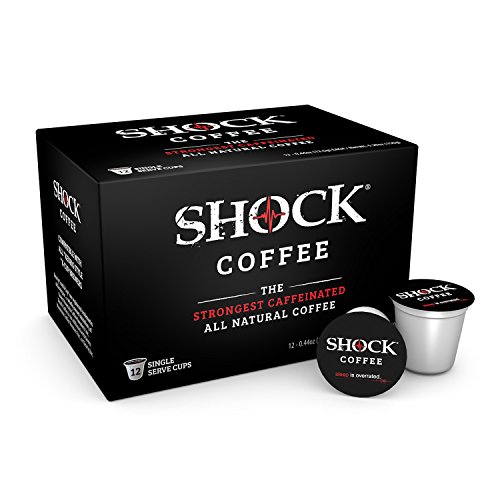 A good brand and a good company (also out of NY) too. No surprise people say that NY is “the city that never sleeps” lol 🙂 I’m pleased to report that no one had any problems with their 2.0 Keurig rejecting the pods.

Its claims that it has 50% more caffeine than conventional brands and is certified organic with brands sourced from Arabica and Robusto beans.

“Robusto” beans are considered very potent and contain higher caffeine content This brand has got some media wide attention and gained some popularity from it.

Well I hope you will give one of these strong k cup coffee brands a try and let me know what you think! Wow, I notice this one common denominator in that all of these brands use black boxes or packaging; pretty wild huh? As long as you know your caffeine threshold…enjoy this lineup!