Well guys, looks like I’m kickin’ off the new year with a review of the Nespresso CitiZ – which is a model that has been around the block for a while – not that I hadn’t noticed it before, but with the emphasis on smaller models, I almost overlooked it. With its modern, retro finish and design, it’s attractive and sure to complement your kitchen or office well.

Be prepared; when you have guests over, they are certainly going to want to give this baby a try. And most likely, afterward, want to consider getting one for themselves too. So here’s the skinny on one of the older, but “goody” Nespressos that is still performing well standing the test of time.

Although the CitiZ is not teeny-tiny like its brethren, the Pixie C60, the Innissia, and the Essenza Mini, it’s still got a rather moderate footprint that won’t hog lots of counter space. The dimensions Amazon lists are 5.1″ in width, 14.6″ in height and 10.9″ in depth. The weight provided says 7.30 lbs, but a little bit further down I saw “8.92” lbs which I’m not sure what the error was for. Just as with the other fine Nespresso models, you will also receive in addition to the machine a welcome booklet, information folder, a bonus gift of 16 Grand Cru Original Line capsules.

The CitiZ appears to be available  in black  or white. but just want to point out that if you spring for the Citiz model made by the company Breville, there is a silver, black, white and red version available. The prices on each, may vary, however.

One of the most popular Nespresso models so far, the CitiZ (it’s pronounced “sit -EEZ” just in case you’re curious) has got the same great features such as

The biggest difference in this model and the others is that the Citiz has an integrated milk frother. that detaches and reattaches to make the most of your experience.

The CitiZ has a 34-oz water tank, which I am told is the equivalent of 1 liter and a little more by 10 oz than its smaller cousins. It’s removable to be refilled and filled; yet one small quirk here (as one reviewer pointed out) the lid comes completely off – kind of has to watch that it doesn’t fall into the tank itself.

The hinged drip tray folds up or down to accommodate taller cups (slightly taller – this is NOT a device for travel mugs, sorry!) and is integrated with the capsule holding bin behind it. I’ve been informed that you have to insert it correctly as one consumer had a problem until s/he realized that the tray had been installed the wrong way. There is a grill that is designed like the drip tray, that can be removed which will create a little bit more space. The inner holding bin can hold up to 11 spend coffee capsules, but it would be a good idea to get into the habit of periodically checking it and emptying it (as well as any runoff in the tray) to avoid the potential of problems.

There is no universal power button; just the Espresso (single shot) and Lungo (double shot) buttons serve as the locus of control for all your actions from brewing to changing the settings. For example, the auto-off can be changed from its default setting of 9 minutes of idleness to a half-hour, or disabled altogether by a combination of both buttons pushed and held for a few seconds.

Other actions such as descaling and tank emptying are controlled this way too. Yes, you can pause and re-start a cycle if necessary BUT even better, when you make a selection you can change the volume of water beyond what is the default setting by pushing the respective button down and holding it until you have reached the preferred amount.

Generally, when the stream starts getting lighter you’ll know that you have reached the threshold of what is extractable from a capsule and still up to par. Not only will this feature let you squeeze a little more of that coffee goodness from the capsule easily…but the unit will “remember” that volume amount for the next cycle.

And if it turned out much better, you’re all set for next time and you can pretty much step away after inserting a capsule and let it work its magic. When you go to insert a capsule, it’s inserted sideways…the foil side should be facing the front.

Unlike the other later models that carry the Aerrocino milk frother as a standalone product, the Citiz has an integrated design in which the Aerrocino attaches at a side port and detaches later for cleaning.

With regard to the inner anatomy, inside the device is a circular whisk which is responsible for the magic.

You have the option to heat and froth your milk, or froth without heating – If you want frothed milk but not hot you would push the button for a few seconds in which case the light on the front turns blue instead of red. When the light is red, it is in froth/ heating mode. This would be easy for me to remember, as we’ve universally accepted blue icons (ex. a snowflake) and lights make you think of cold things and red makes you think of hot. To discontinue this, you would push the button lightly in which case the light will not show.

It goes without saying, but it’s important to be pretty careful when cleaning the Aerrocino due to the electric circuitry. Also it is a good idea to be mindful of the fill lines inside, as some people have reported overflow if they went beyond it inadvertently.

Pro Tip:  If you find the intensity of the froth a little bit too much, you can minimize this by removing the larger outer circle on the whisk.

Save for the occasional DOA that arrives due to an unfortunate Murphy’s Law, this machine is a winner. What tends to muddy up the waters a little, however, is people’s opinions of the Aerrocino’s performance compared alongside the machine itself. I came away thinking it could be “temperamental” for some people. They love the coffeemaker, but they want to love the frother equally and in some cases it’s tricky.

Comments included that of the cleaning procedure, how well it froths and heats, and I kind of came away thinking perhaps….this is why the Nespresso’s successors always make the frother a standalone accessory. Could it be that it is easier to control the quality of the coffee drink when the frother functions separately and independently?

Happy to report that as of this 2022 update, reviews are still highly favorable and people are overall very pleased with this unit.

The price will depend on whether or not you choose the option that includes the Aeroccino. The use of a milk frother, whether this one or another standalone brand you choose, will definitely enhance your experience, who doesn’t enjoy the marvelous sight of a layer of foam like the cherry on top of a hot fudge sundae? Sorry, I had a feeling I would veer off into the topic of sweets – after seeing the many pictures people show of their drinks in the online gallery! Anyway, getting the machine sans the Aeroccino puts the unit at around $30 less.
I did observe that if you check into the version made by Breville – you can also find a pretty red one, and the price is lower if you’re not going to spring for the Aeroccino too.

Because this model is labeled as “discontinued” but also carried by Breville and De’Longhi, this leaves open a wider price range to browse through.; and yes, that goes for all new listings too. I feel that the price stated is comparable to that of similar models that perform at the same standard. 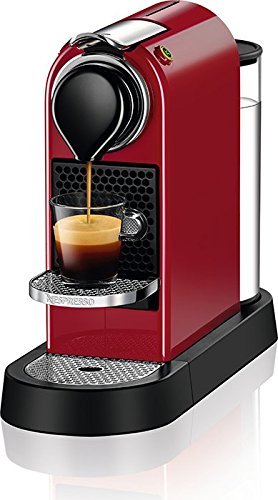 The Verdict on the CitiZ

My final rating: A+ and 4.5 Stars…Excellent

Perfect if your “thing” is mainly espresso. If you are looking for a more “classic” size of cup, I think the VertuoLine series would be more up your alley such as the Evoluo or the Vertuo Plus, which operate on a more generous sized capsule and can pull bigger sizes. But since you have made it this far, I’ll assume  you are in the espresso camp.

Just go for it – it’s a really good machine with few problems and long lasting performance 🙂 I do feel however, that the integrated frother connection is something that can or could be improved upon. Other than that, it’s a great model.