For my Keurig K10 Mini Plus review I am drawing on my own experience as this is the model I personally own, and am quite happy with. I sought it out based on the fact that I am the only household coffee drinker, so I think a personal size compact brewer like this one would fit the needs of someone with a similar story.

This was actually a gift….just FYI. I was in a quandary about what color to choose; at first I had my heart set on the yellow or the pretty green…To help out the gift giver (who was not shopping online) who quoted a more limited color list than I was expecting, I requested the red one since I like red and it’s a good accent color for kitchens.

In a hurry?? Click here to find the best deal on Amazon for the K10

Due to its smaller size, it’s got a shorter clearance than most Keurigs in general. I have a travel cup that’s about 5.25″ in height and if I remove the drip tray it will fit, but that’s pretty much the max height you’d want to attempt.

Along with the brewer itself is a sampler pack with 6 K-Cup flavors, a consumer guide, opportunity to register your brewer (optional) and a limited 1 year Warranty. 
The Keurig K10 has some unique features not found in their larger-sized brethren, highlighted below:

There is a removable drip tray and a “sensor” light that blinks if you have poured too much into the compartment – I have never triggered it to date. When I pull out the tray, it gives me a small (but not much) amount of leeway for a slightly taller cup.

There’s nothing difficult about basic operation, but I’ve found it’s all a matter of doing steps sequentially. After pouring in water it’s important to lift the chamber lid to allow the water to drain into the tank. If this step is skipped the blue “Brew” light will not appear and you may wonder what the heck is going on.

The “add water” indicator light resembles a raindrop. When the right amount of water is  poured in the compartment the  “raindrop” goes away and the blue light shows. The three-prong plug has an attached cord that is rather short (it does retract though)  so you’ll definitely want to be close to a wall outlet for it.

But what is really cool is that you can use any K-cups you want and any of the refillable K-cup brands providing that they don’t say “2.0 models only” I use the “Smart Fill” cups and I don’t have to remove the brew holder assembly which can be tricky; not just for this model but the other 1.0 models too, as I understand a lot of other people would rather not have to remove the assembly.

Most all hot beverages are ready within 2 minutes. On average about 90 seconds is in the ballpark for all of my coffees.

There are also some unique “designer” colors that I thought looked great but I understand do vary in terms of availability and quantity. These colors include: Bayberry Green, Emerald, Aqua, Cobalt Blue, and Mauve.

You can make it any color, as long as it comes in black – Henry Ford 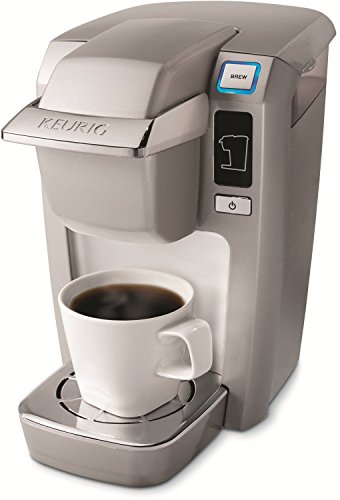 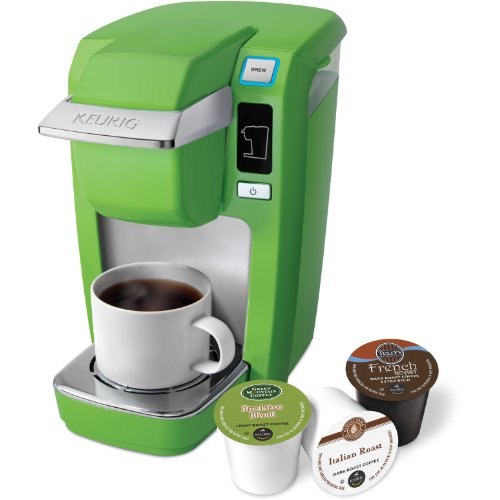 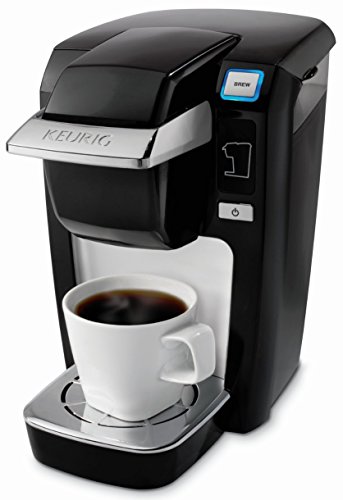 Compatible Accessories for the Keurig K10

I have an understanding that there were concerns that this model was recalled once; the issue was to do with some consumers getting splashed accidentally and people were encouraged to “space out” their brews to avoid this problem. Around this time a free repair kit was issued to consumers.

This consumer report explains the previous K10 recall issue in greater depth. The truth be told, as it turns out this issue does not affect people buying the K10 AFTER July of 2014. I can personally vouch for the truth that I have no safety concerns.

I think it’s pretty reasonable personally…on average a little less than what the bigger Keurigs cost but mainly for its smaller size. At the time I updated this review it looked like Amazon showed my red version being the cheapest which is interesting because usually the black coffee makers always have the lowest price. You will probably notice that it is getting supplanted by the strikingly similar K15 model.

I’m happy to report that many others have provided a favorable Keurig K10 review in addition to mine with a few exceptions here and there. Some people were looking at this one as an “entry level” machine, but others were glad to call it a keeper, and still others purchased this in addition to a larger model they owned, as there’s nothing wrong with having coffee on demand in more than one spot-especially when travelling.

Having to compensate for shorter clearance space with a slightly shorter, wider mug, was a stumbling block for some. This is easily overcome, but did want to point that out beforehand. You can remove the drip tray to make way for a little wiggle room. Read: a “little” wiggle room – a few consumers found out the hard way that travel mugs are not accommodated easily.

As 10 oz of water at a time is the limit, some water may run off into the drip tray and if enough water collects that it needs to be attended to, the overflow indicator light may come on, signaling you to remove it and drain into the sink. I never encountered this but some people were caught by surprise.

I made a video of the Keurig K10 in action after I’d spent a few weeks “breaking it in”:)

Basically, I’m satisfied with the resulting temperature of my beverages (factor in that I do like to add milk and creamer) You don’t have temp control, so the “temp” issue is subjective here. Also, I tend to use room-temp water-this can make a difference in the temp of the resulting beverage.

This is not something on my “must have” list and I find the temperature just fine; but I did want to point that out for people who place a premium on temp control.

This is what makes this a great model overall:

These are the few negatives that myself and my peers brought to light: As time passed the Keurig K10 was supplanted by the K15…which, as I finally concluded, is identical, but with the addition of a few accessories; one of those being the My K-Cup filter which is usually a standalone accessory. I was wondering if it too was getting harder to find. I’ve had my K10 since 2016 and it still works! Just recently (May 2021) I was out browsing for something and I just stumbled across this beauty in poinsetta red at the local Ollie’s (ever been to one of those? It carries lots of “overstock” items. I think it’s a chain place. I live in the Southeast.)

And $49 is a pretty good deal too, as it usually sells for double that amount. If you can find it online for a price like that, don’t hesitate to grab it! Especially if you come across it in a color like this, because as I’ve stated before, the pretty colors tend to exceed the black and white a little in price, no doubt due to popularity. 6 Years Later…I am delighted to report that my Keurig Mini still WORKS!

A  little of the chrome finish has worn off, but you get the idea. But if she died tomorrow I know I’d want to replace it with one like this -or perhaps the more updated K15 model (If I can still find one.)

Being just under a foot tall, this particular model would definitely fit the bill for college students, only coffee drinkers in the household, single apartment dwellers; or pretty much anyone with a small kitchen/kitchenette or just dislikes clutter or the look of gawky appliances irregardless of kitchen size.

If you have a small living space  as well and wants something  that does the job well and doesn’t take up much space, or someone who find themselves in two places a great deal and is considering a second brewer for their office, or to take with them places. You’ll soon find out this little compact brewer is ultimately a great choice!

My cabinet-to-countertop clearance area is 19″ and so this is a great fit overall as I don’t have to maneuver the brewer out when using it, which is nice.

An important note that the K-cup pack holder assembly. may have to be removed for certain types of refillable holders but with the ones I use I don’t have this scenario.

Although it is UL listed for household use only, I think it’d be great in a public office venue.