Guys did you know there is another way to recycle your used Kcups without breaking a sweat or agonizing over what number is on the bottom of the pod, blah blah blah…

Well I just might have the answer, and apologies in advance as I’m late to the party as this tool has been out since 2015. How it eluded me, I don’t know, but I have never seen it in stores, so that could be the biggest reason.


What's on this page?


Anyway, this tool I want to tell you about is called the Recycle -a-Pod by Medelco. It’s basically a round device that looks to be about the size of the pod top, and underneath it is a blade that cuts into the used pod to remove the I mean seperate teh inner lining so the user can remove it and add the used Kcup to the recyclable bin.

Maybe this thing is a little overdue – at any rate, now you can lose the guilt once and for all! 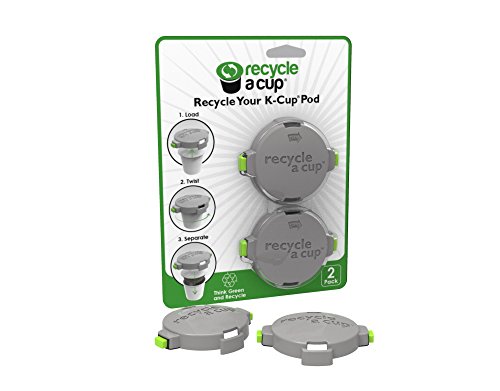 How Does it Work?

You take a used pod (after it cools) and set it on a flat surface and then take the Recycle-A-Pod, place down so it covers the foil area. Push in the green tabs at he side. Press down and turn it a rotation to completely sever the inner liner/full of used grounds. If carried out right, you should be able to remove the liner full of used grounds and the filter liner easily. What you do with those two items is up to you – some people use old grounds as plant soil addition (I hear this is real good for plants) or to the compost heap.

Before something like this came along, you’d have to go to great lengths to actually recycle those pods…take a paring knife and make a round incision all around the K-Cup perimeter, remove the foil, dump out the used grounds, and then hope you can sever the paper filter (which is bonded to the cup) equally well -and hope you don’t accidentally nick yourself in the process.Fun, right?

With the Recycle-A-Pod, kiss that goodbye. So how well does it work?

Well, it seems like a nifty little gadget. A fair amount of people love it and enjoy using it; and admit that it makes the job easier. I did see some images shared that revealed a clean foil removal. The only thing is…it does seem like a great idea…but in practice needs a little fine-tuning.

It’s got this one caveat…the blades get dull after a certain amount of uses. About 5-6 weeks of use is what the packaging states. There are 2 pod cutters in the package for this reason.

Wouldn’t it make more sense to offer replacement blades instead of more cutters? If I were needing to change blades on something, I could drop the used blades into a sharps box or something. See the number 7 on the bottom, 7 is a big recyclable category.

I think new blade replacements would be preferable to new gizmos altogether like this.every 6 weeks…a few others shared this sentiment too.

Second issue: May not be compatible with all brands of K-Cups. It was kind of hinted that the proprietary Kcups would work find but not others so much (Huh? People want to get away from proprietary this or that right?)

And third thing: some consumers commented that the blades could be a little bit longer so they would eviscerate the liner more cleanly.

I found myself thinking of the little pocket knife in my drawer. A small tiny blade. How well would this work? I wouldn’t be as likely to cut myself as I would with a vegetable paring knife or box cutter. OK…It took all of 5 minutes to disembowel this thing. A round incision around the foil cover – easy. The grounds do want to hang on, a slight pierce with the little knife and I was able to pry it loose. Messy yes, dangerous, no.

So should you try out the Recycle-A-Pod?

IF you can locate the replaceable blades…In that case I think this product would be worthwhile. At the moment I don’t think Amazon carries them. It might be a little less trouble than using a little knife as I did.

What are your thoughts? Do you use simple tools to recycle your K-cups? Do you recycle your Kcups or find other uses for them? Drop me a line and let’s hear from you. Hey coffee lovers! It's easy to get misled by the various types of "K-Cup" brewers on the market today when you hear all about the bells and whistles without the "nitty gritty" as well. By in-depth research , testing and evaluating I hope to make your choice much clearer. No need to go around bouncing from site to site - I've got you covered!

Learn How To Clean A Mini Keurig Brewer Like A Boss!

Connect Keurig To a Water Line and Rig Your Reservoir Like a BOSS!

Is iCoffee Out of Business? Your Concerns May Be Confirmed